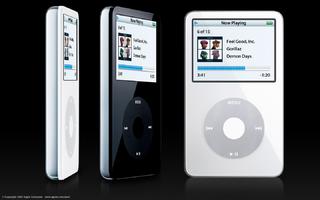 The all new iPod, with video play­back and everything. It’s nice!! How­ever unlike the iPod­nano I don’t want one quite so much. Prob­ably due to the fact I don’t want to watch video on the go.
It is nice though. I like how it has picked up on the styl­ing of the Nano. Unites the fam­ily well. Not that I should really be sur­prised, this is Apple we are talk­ing about and they do know what looks good!!
Talk­ing of look­ing good… 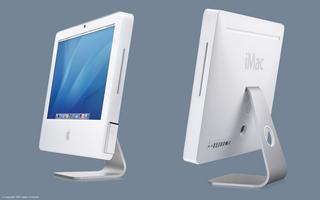 How nice is that??
I soooooo want one. In fact it is on my list of things to get before I gradu­ate, obvi­ously to take advant­age of the nice stu­dent dis­count I have now, and won’t have after I graduate.
It’s a new step for­ward for Apple. It’s the first iMac to have a media centre, kind of step­ping away from the iMac as a com­puter and into the iMac as a key part of home life. Act­ing as a com­puter and a media centre all built in. To me it serves as some­thing to take over from iPods appeal. Obvi­ouslt the iPod will still be a huge factor, but the new fea­tures are centered around Apples new app Fron­tRow. With the remote that you can now get for the iMac and the built in iSight, it just serves to show Apple are striv­ing to be at the centre of home life. Couple it with Air­port Extreme and Express tech­no­logy and you have one massive and very friendly media centre.
I can­’t wait, just wish I had the cash to do it all now. Ah well I will just have to wait. But I so want one!!
As a bit of an aside. It’s nice to see Deli­ri­ous in the iTMS. Their new single is up as a pre-release, although I can­’t buy it at the moment for some reas­on. They have a few of their old album up as well, although dis­s­ap­point­ingly now World Ser­vice, which is a superb album!!